Error: Twitter did not respond. Please wait a few minutes and refresh this page.

Wow, life has really been a little hectic of late but I don’t seem to be doing much or going anywhere. It would seem that the universe has decided that now is as a good a time as any to dump a whole load of crap right down on top of me. Oh don’t worry, it’s nothing I can’t handle but it just seems that it is all happening at once. That could possibly have something to do with that fact that all the crap is related to the one issue of fighting for what is right for my children but it just seems that it is a never ending cascade of murky filth that is encapsulating my life right now. It really has been a trying week and as a result I have found myself totally uninspired and completely unmotivated. Dinners have been really boring and unimaginative but they fill us up and taste ok.

A few weeks ago I was really excited by the fact that winter is well on its way which meant that I could prepare thick, hearty soups and all sorts of yummy stewy dinners, accompanied by delicious, gooey, hot desserts. Ha! No motivation whatsoever. Not even the amazing whiz bang ice cream maker I acquired for Mothers’ Day has  managed to tingle my senses, get my creative juices flowing and slap me into submission to get in that kitchen and weave my magic! Oh, I tell a lie, I made an exquisite rhubarb sorbet on Sunday morning to take to mum and dad’s for us all to indulge in after lunch…topped with fresh pomegranate jewels and sprigs of mint. I’m telling you, this was deeeeeevine but I haven’t even been compelled to add the recipe to my blog. That’s how uninspired I have been.

Ok, so you’re now wondering why I am motivated and inspired enough to add this post. I’ll tell you why. I have had a shit of week and I just wanted to get it off my chest. I’m sick of the tears, the anger, frustration and sleepless nights. I’m also sick of talking but still need to vent, and I want to vent in a way that is kind of unrelated to the issues at hand (if that makes any sense at all). I could keep going over and over things like I am on one of those little mouse wheels, with no escape, but that is really unhelpful and I need to redirect my energy and focus on other things. I need to escape the reality of it all. I need to get into the kitchen and create, or pull out the sewing machine and sew. A little retail therapy would be what the doctor prescribes but I have to be very mindful of what I spend money on right now with birthday season chomping hard at my heels. Really, that alone should inspire me to get cooking, to dream up some delectable party food buuuuut, meh. I’d prefer to sit on my arse, eating all sorts of really disgusting comfort food and drinking decaf coffee.

The house is a wreck and I really don’t give 2 hoots right now. It’s all about me, and the vacuuming can wait, as can the dusting, washing, tidying, etc, etc. You get the picture I’m sure. Or perhaps you have a slightly distorted, if not stereotypical picture of my current situation. Haha, it’s 4pm and I’m sitting around in my pyjamas and slippers, hair dishevelled, stuffing my face with chips and chocolate. NO WAY! I am showered, dressed, hair “immaculately” (note the sarcastic tone) blow waved and the dishes are done. I’ve even managed to strip the bed and get the sheets washed and on the line. Oh, bubs is even out of his jammies! So it’s not that bad really, I do like to exaggerate a little. Just feeling rather flat with a real “ho hum” attitude. Tomorrow is a new day and with it comes the start of the weekend. With a bit of luck, no not luck. With a bit of “R & R” I’ll be back up and firing on all cylinders next week, concocting more delicacies and putting big satisfied grins on my family’s face.

Ahh, a morning where I don’t have to rush around and be places or do loads of houswifey stuff. I felt a little energised at the thought of it all so I threw on some clothes (no time for a shower) and walked the kids to school (something I very rarely do) then stopped at the shops to get what I need for dinner…we’re having a chicken bake. After getting back home, I showered, ate brekky, popped on a load of washing to make the most of what I expect will be the last warmish day until spring and suddenly felt at a loose end. What to do with my time? I decided to bake, but since I have an optometrist appointment at 2 and a baby to deal with as well, it had to be something quick and simple. But what? Ah, I have birthday season biting at my heels and I need to come up with some kid friendly party food. Remembering my childhood, I took 2 old classics and came up with my very own “new classic”. I can’t wait for the kids to get home and try them, I think they’ll love them, I certainly did! Actually, I might even pop 2 doors up and try them out on a pre-schooler in the meantime, unless of course I end up eating them all.

Heat oven to 150° C and then line a muffin or cupcake tray with patty pans. Place nuttelex, maple syrup and sugar in a small saucepan and heat over low heat until melted and bubbly. Pour over the rice puffs and stir thoroughly. Quickly spoon into prepared pans then bake for 10 minutes. Remove from tray and allow to cool completely on a wire rack.

There’s nothing like soup on a cold day! I used to make a delicious zucchini soup, rich with cream and fragrant with tarragon but now I can’t feed that  to the kids 😦 I even thought that zucchini was a no no altogether but I recently found out that they are ok in moderation as long as they are peeled so I was very enthused to try my hand at a “friendly” zucchini soup. I tried it out for the first time when our overseas guests were here and it got the thumbs up…in fact I was told that it was “perfect”, hence the name. When I told the boys that I was making zucchini soup for dinner, they were both rather excited…but was it the soup or the home made gluten free bread they were excited about???

Over high heat, heat a little oil in a large saucepan. Sautee the leek until just tender than add the garlic and zucchini.Reduce heat and cook for about 10 minutes, stirring regularly to avoid browning. Add the stock and saffron, turn up the heat and bring to the boil. Reduce heat, cover and simmer until the zucchinis look a bit mushy. Remove from heat and blend until smooth and creamy then season to taste.

I’m sitting here eating last nights left overs as I type. It really was YUM! A few years ago I came up with a recipe for the best veggie patties ever. Everyone who ever ate them raved about them, hard core meat eaters too. I became known in my various circles as the veggie patty queen. Whenever I was invited to a bbq, I was asked to bring my famous patties with me and I was handing out the recipe left, right and centre. Even my mum asked for the recipe and the patties became a staple in my parent’s lives but dad had to have a steak on the side.

After a while I realised that I could use the same mix to make an even quicker meal, veggie slice. I just poured the mix into a well greased baking dish,  popped it in the oven and walked away for about 45 minutes….much easier than standing at the bbq or stove  methodically pouring large spoonfuls of the mixture onto the hot plate or fry pan, waiting for them to brown, flipping them, browning again then removing to a plate in the oven to keep warm. It also freed me up to do other things, like clean. So this became an almost weekly meal for us.

When the kids started on the RPAH elimination diet, a diet developed by the Royal Prince Alfred Hospital’s Allergy Unit to help people determine what foods they are sensitive to, I tried my hand at making a gluten free and allergy friendly version. I always used pumpkin as one of the base vegetables but recently we discovered that my middle son goes totally off his head soon after eating it so I have had to revise the veggie content, leaving out the pumpkin and thankfully it still tastes bloody good. The veggies I have listed below are really just a guide. You could use almost anything. In the past, I have used zucchini, potato, peas, asparagus, marrow, just to name a few, but now I have to be a lot more mindful of what I include or else we end up with some pretty severe behavioural issues with my 7 year old.

Oh, a new discovery as we speak!! I just cut up the left overs (the leftovers that I couldn’t fit in) into fingers and bubs is loving munching on them for lunch. I think he’s really loving the freedom of feeding himself. He’s giggling as he eats and really having a wonderful time with it…there isn’t even any on the floor, yet. The best part about it is the slice is totally Bubba friendly…oh, the egg. He reacted to his first attempt with egg so it will be interesting to see if he reacts to this.

Another thing, there is no need to be precise with the amount of veggies.I have always found that no matter how much or how little veggies are in this, it always turns out ok. You can add some bacon or roast chicken to it also and some of your favourite seasoning mix if you like. Before I discovered my son’s intolerances, I often used some Moroccan seasoning or even a little curry powder.

Preheat oven to 180° C. Sautee the leek and garlic in a little oil until the leek has just wilted. Add the leek and garlic to the grated veggies and chives and mix well.  Place all the dry ingredients into a bowl and whisk gently to combine. Stir into the veggies and mix thoroughly. Whisk the eggs, milk and oil together then add to the veggies and stir to combine. Pour the mix into a well greased baking dish and cook for about 45 minutes or until set. You can tell it’s set when the edges of the slice have shrunk away from the sides of the dish a little. 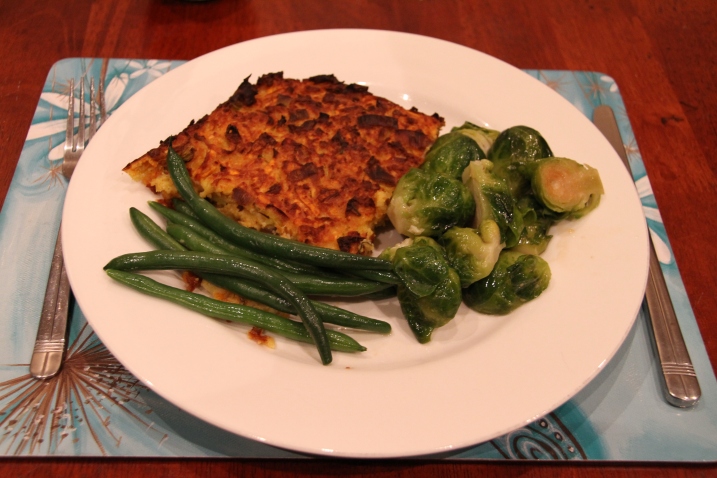